The NCCPA board scores are a good indicator of medical knowledge. The goal of the PA department is to obtain a first time passing rate in the 90 percent range. Three of the classes that graduated in the past five years have passing rates greater than 90%, most importantly the two most recent classes.

In the graduate survey sent to the most two recent classes, 95% of the alumni agreed or strongly agreed that the course work provided solid fundamental knowledge for rotations. The practical department goal is for at least 90% of the graduates to agree or strongly agree.

The PA Department goal is that at least 90% of our students to average “3”or higher on all questions in the assessment tool that pertain to communication in the summative Problem Oriented Physical given to second year PA students.

99% of the students in the last three graduating classes received a score of three or higher.

The PA Department goal is that all students earn a passing grade in clinical education rotations. The grade is composed of a preceptor evaluation, end of rotation exam, and sample patient note.

For the last three graduating classes, 100% of all students have passed all their rotations. No unsatisfactory grades were recorded.

The PA Department goal is for all students to achieve at least a score of 4 out of 5 points in areas of professionalism on the Clinical Preceptor Evaluation Form given to second-year PA students. For the most recent graduating class, all students were above 4 points. 94% of the class was in the 4.9 to 5.0 range.

The practical PA Department working goal is that at least 80% of the students correctly diagnose a patient in a summative Problem Oriented Physical Examinations given to second year students near the end of the curriculum.

For the last two graduating classes 87% of the students were able to correctly diagnose a patient based on history, physical exam and laboratory findings in a Problem Oriented Exam situation.

The graduate survey sent to the most recent graduating class (response rate = 65%) indicated that 94% either moderately or greatly agreed that critical thinking skills learned in the program assist in decision making in their daily practice.

The program goal is for all students to achieve a passing grade on the evidence based examination taught during the first-year of the PA curriculum. 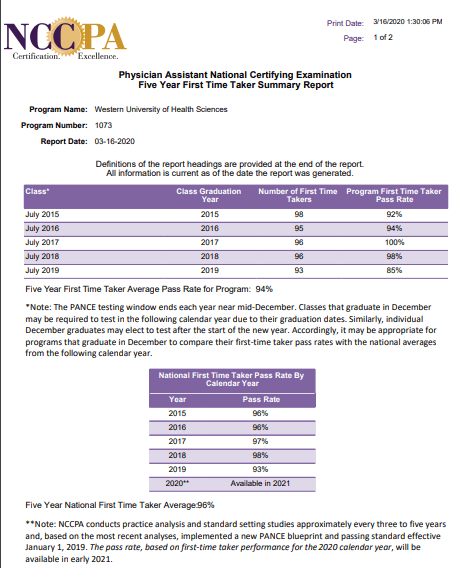 From the PA Alumni:

From the PA Faculty:

Keep up-to-date with the latest news and announcements from WesternU!