WesternU’s IPE program is one of the largest in the country in terms of class size and number of health professional programs participating. Since beginning in 2009, over 5,000 students completed the IPE 5000 series and 4,000 completed the IPE 6000 series. These numbers have grown with the expansion to the COMP Northwest campus and IPE partner institutions in Oregon, and will continue to increase as the curriculum reaches the clinical years.The strategic planning that occurred in early stages largely contributed to the current and future development of the program.

On July 23, 2007, the formal planning process for Western University of Health Science’s Interprofessional Education was launched via an inaugural IPE Committee meeting. University faculty, staff and administrators appointed to the Committee by Dr. Ben Cohen, then Provost and Chief Operating Officer, officially kicked off the IPE planning process.
In fall 2007, a series of small group faculty luncheon meetings were held to discuss the concept of interprofessional education at WesternU. More than 80 faculty members participated in these brainstorming sessions. The idea to conduct a pilot study on the design of a case-based course was only one of many ideas generated at these important faculty meetings.
The IPE Planning Oversight Committee was a dedicated group of WesternU faculty and staff. The Committee met periodically to review the progress of the IPE work groups. The IPE Committee was further divided into nine work stream groups:

A total of 50 dedicated, talented faculty (medicine, nursing, pharmacy, physical therapy, physician assistant, veterinary medicine, optometry, dental medicine and podiatric medicine) and administrators were members and leaders of the work groups. These groups met to plan, develop and implement the various aspects of the IPE curriculum. You can find the members of the IPE Oversight Committee at the bottom of this page.
The Chairs of the work groups served as members of the IPE Steering Committee. Dr. Sheree Aston, Vice Provost, Academic Affairs is the Chair of the IPE Initiative. The department of IPE was established in 2009. Dr. John Tegzes is the Director of IPE. Faculty members from each of the 9 health professional programs serve as liaisons for each of the three program phases.
The first phase of this curriculum started in the 2009-2010 academic year, concurrent with the opening of the new colleges of optometry, dental medicine and podiatric medicine. The second phase of the curriculum started in the 2010-2011 academic year. Portions of the third phase have been in pilot testing since the 2011-2012 academic year. 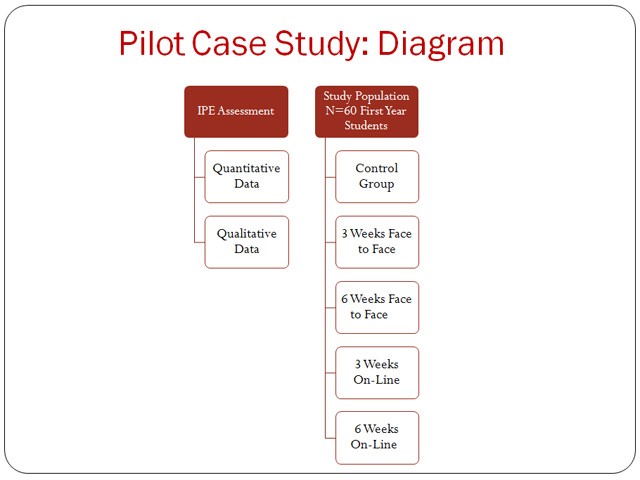 The purpose of the six week pilot study was to determine the most effective method to deliver a case-based interprofessional education course at WesternU. Student attitudes toward IPE also were assessed.

Two IPE delivery aspects – format and length — were considered. Format included either all face-to-face sessions or a blend of face-to-face and online classes. In addition, each format was taught over either a three- or six-week period. The same case scenario was presented to all groups. Data also was collected on a control group to compare their changes in attitudes toward IPE with the experimental groups.

The case scenario, which was developed by faculty representatives from each college, related to an obese adult male with diabetes who recently sustained a knee injury requiring a visit to the ER. Select the link to see the full text of part 1 of the actual case used in the study.

Data collected prior to randomization included the Interprofessional Attitudes Questionnaire (IAQ) and information pertaining to program, age, gender, previous exposure to other professions, and previous exposure to online and small group discussion teaching methods. Students submitted weekly logs, completed a post-IAQ, and participated in focus groups at the end of the course.

Fifty-eight (96.7%) of the student volunteers completed the study. Results showed that the groups were equivalent on all baseline data except for exposure to small group learning. While the main effect of length (three vs. six weeks) was not significant, the main effect of format showed a significant difference in attitude toward the face-to-face and blended online groups, favoring the former. Analysis of the student focus group comments reveals that students have a strong preference for face-to-face teaching over a three week period. The charted results are shown below. 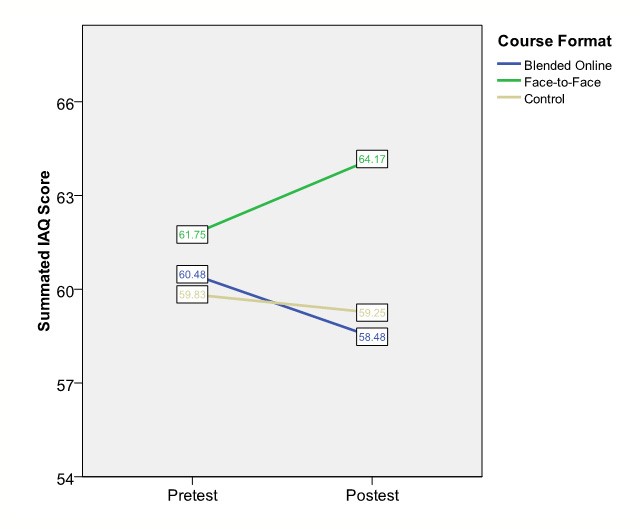 This figure shows the combined group pre- and post-test means for those students assigned to either face-to-face, blended online and face-to-face, or control group. Numbers represent summated IAQ scores. Overall, the analysis revealed a significant main effect on course format. Specifically, students in the face-to-face (mean = 64.17) condition demonstrated an increase of 2.42 points on the IAQ; whereas, the online group (mean =58.48) showed a 2 point decrease in attitudes. The control group (mean =59.25) had less than a 1 point decrease which exhibits consistency between the pre and post-test.
Close examination of the graph above suggests that the main effect of course format was driven by the face-to-face group, which showed a pre-posttest increase; whereas, the other groups decreased. This notion is supported by the analysis, which revealed a significant format x time (pre, post) interaction (p = 0.043).

• A case-based approach can be used early in the curriculum to bring together teams of students as part of interprofessional education.
• Cases need to be designed at the level of the students’ current knowledge.
• Students are very open to learning about and from each other.
• A three-week face-to-face format is most effective in changing student attitudes toward interprofessional education.

Interprofessional education provides an opportunity for students to learn from and teach others about their roles in healthcare. The type of understanding could influence how services can be provided to the public.

What did Student Participants say about the Experience and IPE?

• “When you go out to the field right now, I don’t think the professions necessarily work in unison and that’s sad for the health-care system. This is the direction our health-care system needs to go and by incorporating more of these activities we can be part of that new movement.” DO Student
• “The PT wanted to order labs and do exams, the nursing student wanted to know his pain level, etc,; as a PA that wasn’t my first thought. That reminded me that one person can’t do the whole job and to do a more efficient job, you have to be aware of everybody’s role in the health-care system.” MSPA Student
• “A lot of patients are discharged from the hospital and they don’t know why they’re taking certain medications, so a lot of our time is spent talking to patients, doctors and nurses. I think that having a better understanding of each others’ roles will help us communicate better.” PharmD Student