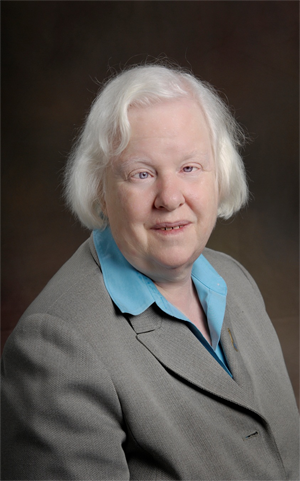 Brenda Premo, MBA, continues her work as a champion for disability rights as founding director of Western University’s Center for Disability Issues and the Health Professions. Premo graduated with a Bachelor of Arts degree in psychology from California State University at Long Beach and earned her MBA from Pepperdine University.

Her work in civil and disability rights drew the attention of several prominent government leaders, including President Ronald Regan, who named her to serve on the National Council on Disability in 1986. As a Council member she helped develop language for legislation which evolved into the Americans with Disabilities Act (ADA), passed by Congress in 1990. She continued her ADA work while with the State Department of Rehabilitation, serving as a senior management lead in the public and private sectors on the ADA and its implications.

She has led several workshops and given several presentations for the Council since her term ended in 1991, including a presentation on “The Challenge for the 21st Century,” at the National Disability Policy Summit, Achieving Independence in 1996.

Her awards and commendations are many. The California State Senate honored as “Woman of the Year” in 1988 and in 1998 she received the National Rehabilitation Awareness Foundation’s “Special Achievement Award.”

In 2007, Premo was given the additional title and duties of Assistant Vice President of Government Relations. Premo reports directly to President Philip Pumerantz and is responsible for coordinating university interactions with county, state and federal policy makers. She coordinates university efforts on public policy and white papers for distribution to lawmakers. She coordinates on-campus forums on key health and disability policy issues.

“Brenda is known across the country for her sense of humor, her experience and passion for the work she does,” said Western University President Philip Pumerantz, PhD. “Her outstanding reputation will enhance the education of health professionals here and throughout the United States. We are honored to have her on our campus.”