The lysosomal protein, LAMTOR1/p18, regulates learning and memory by controlling mTOR signaling pathways; alterations in this regulation contribute to the pathogenesis of Angelman syndrome

One of the Bi Lab projects over the last few years has focused on the mTOR (mechanistic/mammalian target of rapamycin) signaling pathway. mTOR consists of two complexes, mTORC1 and mTORC2, and integrates signals from nutrients, energy levels, growth factors, and stress status. We have recently found that mTORC1 activity is increased while mTORC2 activity is decreased in a mouse model of Angelman syndrome (AS), a disease caused by maternal UBE3A deficiency. The imbalance in mTORC1 and mTORC2 activity is causally related to learning and memory impairment and motor dysfunction in AS mice. Furthermore, we have found that increased mTORC1 activity is due to increased levels of LAMTOR1 (a.k.a. p18) in AS mice due to the lack of Ube3a-mediated degradation. Since abnormal mTOR signaling has been reported in other neurological disorders, including Alzheimer’s disease and autism spectrum disorders, our findings may have broad implications for the understanding of numerous neurological disorders. 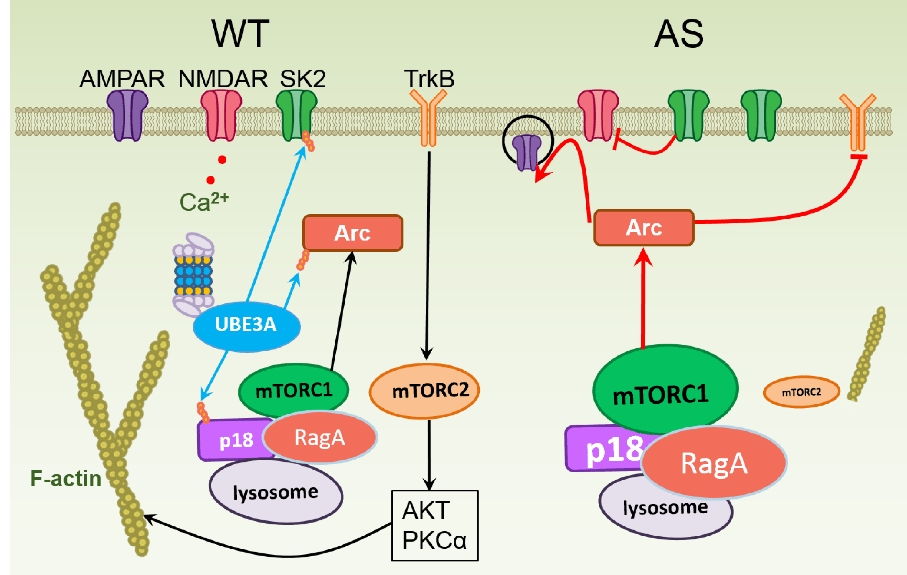 Potential roles of p18-mTORC1 signaling in  synaptic plasticity and learning and memory in wild-type mice (WT) and Angelman syndrome (AS) model mice.

Regulation of potassium channels by UBE3A

Small conductance calcium-activated potassium channels (SK1-3) are widely distributed throughout the brain and other organs. SK2 channels play important roles in learning and memory and in abnormal brain functions, such as epilepsy and schizophrenia. We have recently shown that synaptic SK2 levels are regulated by UBE3A-mediated degradation, and that lack of this regulation resulting from UBE3A deletion contributes to learning impairment in Angelman syndrome mice. Currently, we are investigating whether protein kinase A-mediated regulation of SK2 channels influences their regulation by UBE3A. Since SK2 channels are widely expressed in mammalian brain, these findings have significant implications for a vast array of neurologic/neuropsychiatric disorders. 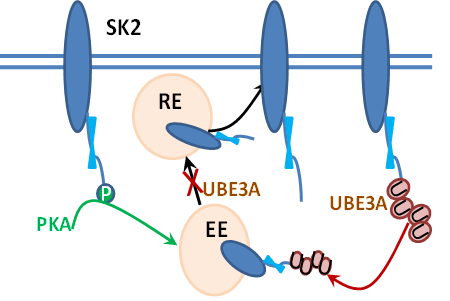 We previously reported that lysosomal dysfunction started earlier than previously thought during aging in mammals and was already apparent in middle age. Recent studies have shown that lysosomes have much broad roles than just being a “cellular digestion organelle”; these functions include regulation of protein synthesis and degradation, lipid and glucose metabolism, and gene transcription, at the cellular level; lysosomes also play a significant role in learning and memory, immune function, and cancer development and aging process, etc., at the system level. We are currently developing in vitro and in vivo assays to further investigate the roles of lysosomes in age-related neurodegenerative diseases.