The overall goal of the Peterfy Laboratory is to understand mechanisms involved in common metabolic conditions such as obesity, diabetes and dyslipidemia. Our research strategy is to identify genes associated with metabolic abnormalities in mouse models or humans, followed by mechanistic studies using molecular, cellular and organismal approaches. To identify genes of metabolic interest, we have been pursuing two general strategies. The first strategy exploits naturally occurring genetic variation in the mouse to discover genes responsible for metabolic phenotypes. In the second strategy, we identify candidate genes based on human genetic data, followed by characterization in engineered mouse models. Current projects in the Peterfy Laboratory focus on dyslipidemia (i.e., abnormal levels of cholesterol and triglycerides in the circulation), a principal risk factor for coronary artery disease and associated mortality. Our studies aim to identify molecular determinants and mechanisms responsible for dyslipidemia to enable the development of novel therapeutic approaches.

The LMF1 gene was discovered in a naturally occurring mutant mouse strain (cld, combined lipase deficient) exhibiting hyperlipidemia. LMF1 is a chaperone residing within the endoplasmic reticulum (ER), where it is required for the post-translational activation of several lipases involved in plasma lipid metabolism: lipoprotein lipase (LPL), hepatic lipase (HL) and endothelial lipase (EL). In the absence of functional LMF1, as in cld mutant mice, these lipases are inactive and triglyceride clearance is impaired, leading to the accumulation of lipids in the circulation. Similar to the cld mouse model, human LMF1 mutations are associated with lipase deficiency and hypertriglyceridemia.

Our current studies on LMF1 aim to: 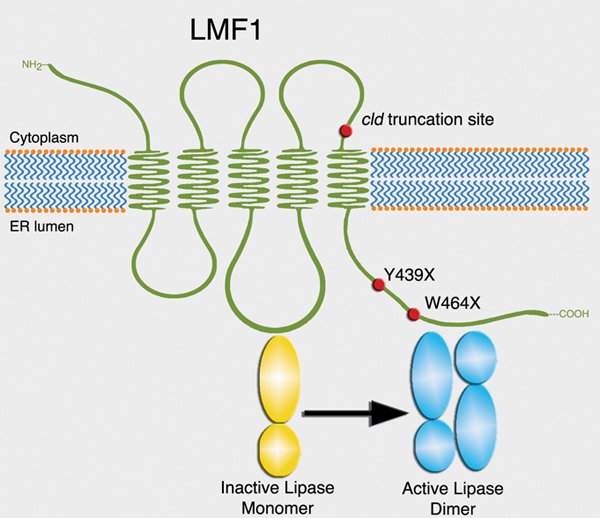 Structure and function of LMF1. Mouse and human mutations associated with hyperlipidemia are indicated with red dots.

Genome-wide association studies (GWAS) in human populations have uncovered numerous chromosomal regions associated with a variety of metabolic traits, including plasma lipids such as cholesterol and triglycerides. Many of the lipid-associated chromosomal intervals contain genes not previously implicated in lipid metabolism and offer a rich resource for the identification of novel genes and mechanisms affecting this process. Thus, the overall goal of our project is to use human GWAS data as the starting point to discover novel determinants of plasma lipid levels.

Major aims of the project are to: