The main theme that is interwoven throughout all of my scholarly pursuits has been an infectious fascination with the extraordinary success of pathogens. They remain one of the greatest causes of morbidity and mortality worldwide in all living organisms. In humans, pathogens often take a disproportionate toll among those that have the fewest resources and thus these diseases can be notoriously difficult to control. My research seeks to uncover the ecology and evolution of disease in order to inform control efforts and improve health.

Schistosomiasis is a chronic inflammatory disease that infects over 250 million people, most of whom reside in Africa, and many of whom are children living in poverty [1, 2]. Control of this disease relies primarily on mass drug administration; however, in most endemic transmission foci in Africa, additional approaches are critical if transmission is to be reduced or eliminated. Even after drug treatment, people are rapidly reinfected because the parasites reside and multiply within freshwater snails that are widely distributed in primary water sources. Research efforts to develop mechanisms to block transmission in snails and thus prevent human infection are underway; however, almost all of these efforts have been focused on a South American species of snail, while virtually nothing is known regarding African snail vectors. Our project uses wild populations of African snails to uncover their genetic mechanisms of resistance to infection, so that these mechanisms can be exploited to block schistosomiasis transmission and improve human health. This project is funded through the NIH NIAID R01AI141862 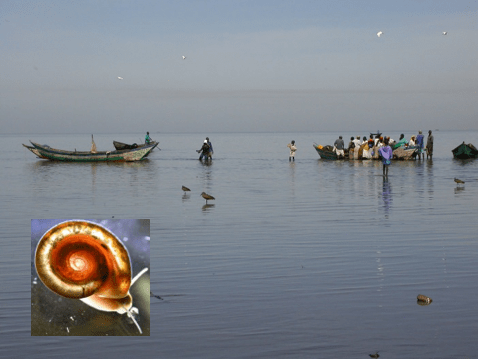 Freshwater snails of the genus Biomphalaria transmit schistosomes to humans. Snails release thousands of parasites daily into the water. Parasites penetrate the skin of humans and cause a chronic inflammatory disease.

The effect of schistosome parasites on host behavior—an interaction through the microbiome?

Schistosomiasis is a chronic disease of inflammation caused by flatworms that invade the vasculature of the intestine or urogenital organs. Chronic infection of school children in endemic countries has been shown to reduce cognitive ability and increase behaviors such as anxiety, hyperactivity, and “acting out” [5]. We hypothesize that schistosomes can influence host behavior through the gut-brain axis indirectly by influencing the microbiome of the intestine. Schistosome eggs passing through the intestinal wall create local inflammation that is likely to influence the microbiome composition and function. In turn, these changes could alter host behavior as inflammation in other disease contexts drives microbiome associated changes in anxiety behaviors and memory in mice.

The primary goal of this project is to determine the effects of schistosome infection on the behavior of a mice as a model of human infection. We have performed a series of infections, behavioral tests, microbiome analysis, along with assays of inflammation and neuropathology to answer this question. Our preliminary results have shown that infection increases anxiety, compulsion, and delayed spatial learning and memory and we are working to determine the underlying mechanisms of these behavior changes.

It is becoming increasingly apparent that an individual’s risk of infection and degree of illness is strongly influenced by a variety of ecological factors including abiotic climate factors, coinfecting pathogens, and diversity of host communities. Additionally, because hosts and pathogens can inflict large fitness consequences on their hosts, they have a large role in shaping each other’s evolutionary history and future trajectory. In this framework of thinking, we work on projects involving natural, wild disease systems and include their inherent complexity as well as set up well controlled laboratory experiments to determine the effects of parasitism on life history evolution. It is these approaches together that will help us understand the ecology and evolution of disease processes. 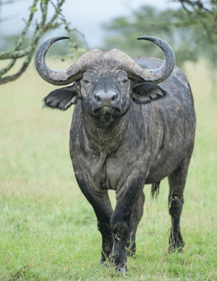 Schistosomes are one of the many pathogens that infect African Buffalo. Climate, nutrition, immune response, and other pathogens all influence the prevalence of schistosomes in buffalo [4]