The Wagner lab focuses on the central regulation of energy balance (i.e., energy intake and expenditure). We probe the influence of sex and the activational effects of gonadal hormones on the signaling of critical neuropeptides (e.g., nociceptin/orphanin FQ (N/OFQ), pituitary adenylyl cyclase-activating polypeptide (PACAP)) and neuromodulators (e.g., endocannabinoids) within the homeostatic (i.e., nutrient sensing) and hedonic (i.e., palatability sensing) energy balance circuits. We also evaluate the impact of energy status across the spectrum – from negative energy balance (e.g., fasting) to positive energy balance (e.g., diet-induced obesity) – on the functioning of these distinct yet overlapping circuits. We use state-of-the-art optogenetic and chemogenetic techniques in strategically determined transgenic animal models to elicit cell type-specific excitation or inhibition of critical neuroanatomical substrates within these circuits and ascertain the corresponding changes in energy intake, meal pattern and energy expenditure. Our work provides direct translational insights into the underpinnings to clinically relevant conditions such as HIV/AIDS-related cachexia and diabetes/insulin resistance. 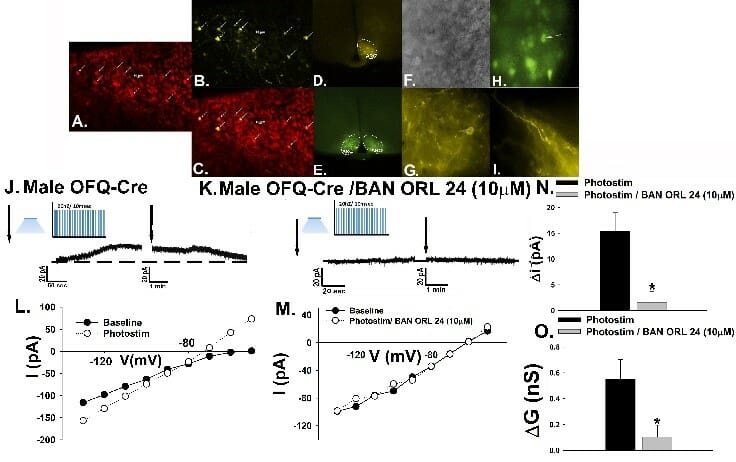 We have shown over the years that N/OFQ profoundly impacts neuronal activity within critical anorexigenic (i.e., appetite suppressing) circuits involved in the hypothalamic control of energy homeostasis. This occurs through both presynaptic and postsynaptic mechanisms. As shown below, optogenetic stimulation of ARC N/OFQ neurons inhibits anorexigenic proopiomelanocortin (POMC) neurons in double transgenic N/OFQ-cre/ eGFP POMC mice. The photomicrograph below illustrates the N/OFQ immunostaining in the ARC visualized with AF546 and colocalized with channelrhodopsin (ChR2; visualized with an eYFP reporter signal. The photostimulation elicits a robust and reversible, nociceptin opioid (NOP) receptor-mediated outward current in the POMC neurons that reverses polarity near the equilibrium potential for K+ and is accompanied by increased slope conductance.

Within the hedonic circuitry, our recent findings demonstrate that N/OFQ also inhibits mesolimbicortical (A10) dopamine neurons in the ventral tegmental area (VTA) that influence natural and drug-induced reward as well as addiction. This occurs upon activation of NOP receptors via the same mechanism as describe above for POMC neurons.

As mentioned above, one of our main research objectives is focused on the critical anorexigenic circuit within the hypothalamic energy balance circuitry comprising upstream PACAP neurons in the ventromedial nucleus that synapse with POMC neurons in the arcuate nucleus. Chemogenetic activation of PACAP neurons increases cFOS expression and the firing rate within these cells. This results in decreased energy intake and meal size, which is accompanied by an increase in energy expenditure.

While the homeostatic energy balance circuitry within the hypothalamus is principally concerned with need, the hedonic energy balance circuitry, on the other hand, is focuses more on the want. A10 dopamine neurons have been implicated in food addiction and impulsivity. As shown below, intermittent short-term exposure to a “Westernized” high-fat diet elicits a dramatic escalation in consumption, such that subjects end up eating considerably more of their daily intake during just that one exposure. N/OFQ administered into the VTA reduces this binge-like escalation via a NOP receptor-mediated mechanism in a manner dependent on sex, the gonadal hormone milieu and dietary status.

What We Want to Test

Our current studies regarding N/OFQ are aimed to test the hypothesis that N/OFQ regulates homeostatic energy balance circuitry in a sex- and diet-dependent manner by specifically determining whether:

We also are looking to test the hypothesis that N/OFQ modulates circuits regulating energy balance and related appetitive behavioral processes in a sex- and diet-dependent manner as assessed by the ability of: