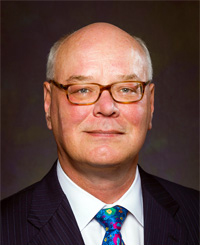 Dr. Wilson is the former Vice President for Health Affairs and Dean of Medicine at the University of Florida Health Science Center — Jacksonville. He oversaw the academic, clinical and research activities at the center, which includes a 695-bed teaching hospital and schools of clinical medicine, nursing, and pharmacy. Prior to joining the center, he was Chairman of Psychiatry at Creighton University, where he expanded the full-time psychiatric faculty from three to 30, raised clinical service and revenue sixfold in 10 years, and grew the research portfolio from zero dollars to $17 million over the same span. Prior to Creighton, he was medical director of Ohio’s largest state hospital, and from 1987-92 directed neuropsychiatry at McLean Hospital & Harvard Medical School in Boston.

Dr. Wilson is a past president of the American Neuropsychiatric Association, and has been an invited lecturer at more than 200 universities or professional societies worldwide. His research includes more than 350 formal scholarly communications, including more than 100 refereed reports, chapters or other submissions, and more than 100 abstracts or presentations at national and international meetings. He has been principal investigator on more than 80 grants, with more than $10 million funded as a PI and Co-I or consultant on 50 other studies.

Dr. Wilson, a native of Manson, Iowa, earned his bachelor’s degree in anthropology from Yale, a medical degree from the University of Iowa Carver College of Medicine, and a PhD in biological anthropology from Cambridge University. He performed his internship, residency and fellowship at McLean Hospital & Harvard Medical School, and is a Case Western Reserve University diplomate in Mental Health Leadership and Management.

He and his wife, Sandy, have one grown daughter.