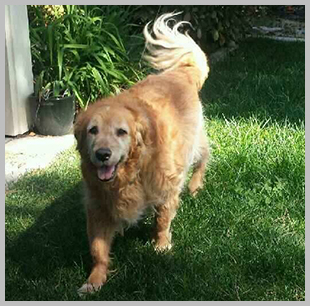 Cami took possession of me, and the front passenger seat of my car, as an eight week old pup, and defended the latter from anyone who had the foolish thought to displace her from there. She worked hard to keep the back yard free of all enemies, both foreign (raccoons, squirrels, coyotes) and domestic (the neighbor’s cat), but more than met her match when she took a pee while straddling an electric fence around the koi pond.  Cami and I however quickly worked out an accommodation regarding whose end of the couch was whose…[er] most of the time, that is.

Cami became the first patient of the Hill’s Wellness Center, when she needed her first rabies booster and Professor Boynton needed to conduct a test run of the clinic.  From that point on, she patiently endured the pokings and proddings of many veterinary students.  And she offered her last lesson as part of the WAVE program.

For twenty minutes, every morning for nearly 14 years, we took our walk together.  At first, the pace and distances covered were broad, then more and more restricted as age and arthritis took their unrelenting toll, until that last day when her body whimpered, “no more.”  Of all the material vestiges left behind, I am unable to bring myself to part with her collar and leash –  fond remembrances.

Back to Pet Memorial