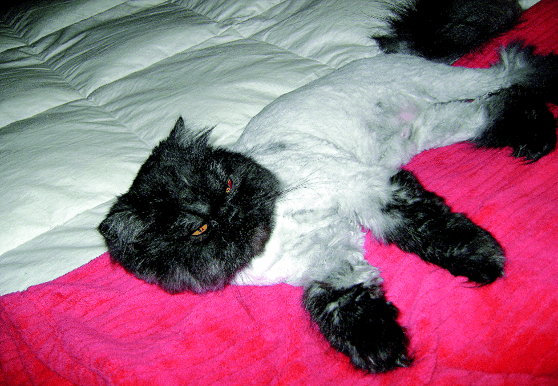 I met Frankie through a breeder of Persian kittens. He was five months old and I fell in love with his huge orange eyes. Frankie had a unique personality and wanted to be held all the time. I would hold him on his back like a baby, and he would just stretch and lay limp like a lazy dog in my arms. He enjoyed playing fetch with rolled-up paper balls and wasn’t shy about letting me know that HE decides when playtime is over. He enjoyed riding in the car with me, being groomed, and having the run of my apartment.

One day his groomer told me Frankie had a large bruise on his lower stomach. It didn’t get better after two weeks, so I took him to the vet. After three more weeks, we had his skin biopsied. We learned that Frankie had a malignant tumor of blood vessel cells. Two surgeries and 10 weeks later, we realized he was dying, so I had to let him go. He was a month short of his third birthday.